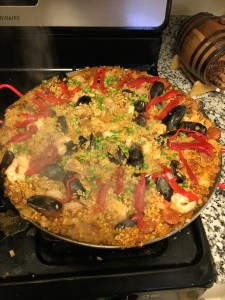 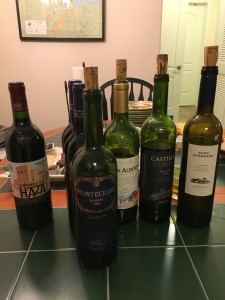 What better excuse to break out the Spanish wines than with a paella party? I love cooking paella because it feeds a crowd. There’s a lot of prep work because there are so many ingredients, but the actual cook time is pretty short, which gives you time to mingle with the guests while aromas of sautéed onions, smoked paprika, and spicy chorizo fill the house.

This Friday, I hosted a paella & Spanish wine party for my co-workers. I provided the paella as well as some Spanish inspired nibbles–Marcona almonds, Basque style olives, Jamon Serrano, and an assortment of Spanish cheeses. I asked them to all bring a Spanish wine under $20. There are so many delicious Spanish wines on the market that offer great bang for your buck, this is a great way to try some new ones. Look toward the regions of Calatayud, Jumilla, and Toro for awesome wines around $10. My co-workers, however, were a little more ambitious, or maybe I should say a little more traditional. We ended up with a table full of Riojas (mostly reservas).

Rioja is probably the most famous wine-producing region in Spain. It sits in the middle of the country in the north, about an hour south of San Sebastian. The wines are made primarily from the Tempranillo grape, but they are often blended with Mazuelo (Carignan), Garnacha (Grenache), and/or Graciano. On the label of a bottle of Rioja, you’ll see a designation of crianza, reserva, or gran reserva. These designations indicate the aging process that the wine has been through.

On our table were three reservas, which means that the wines were aged for at least three years, one of which had to be in oak barrels. It was a great platform for tasting the wines side by side for comparison. The standout to me was the 2008 Viña Alberdi Reserva from La Rioja Alta, a quality producer that’s been around since 1890. It had a lot of depth and some nice warm tones of dried cherry, cedar and vanilla. The 2009 Bodegas Monticello Reserva, which was the most purchased wine (3 people brought it) was charming and easy. Lighter in body, it had a nice red fruit character to it, but was not particularly long lived on the palate. The 2009 Castillo Clavijo was a little funkier than the others. With a slight whiff of brett (brettanomyces), this wine had a kind of gamy spiciness that I tend to associate more with some of the Mourvedres from Bandol than the Tempranillos from Rioja. This was the only wine of the three that wasn’t 100% Tempranillo–it had small amounts Garnacha and Mazuelo. The funk wore off after a while leaving a pleasant, medium bodied wine with an interesting spice character. While most of my friends prefer red wines, I love a good white, so I also opened the 2013 Pazo Señorans Albariño from Rias Baixas. Vibrant with racy citrus notes, it went perfectly with the seafood paella, making me wish I was in a cafe on the Galician coast.

If your interested in trying out a paella party, I highly recommend The Spanish Table retail shop in Berkeley, California. They also have locations in Mill Valley and Seattle, and on online store. I bought both of my paella pans there, and regularly shop there for paella ingredients. They’ve got an array of paella pans to feed any crowd from about 4 to 30 people, Spanish cheeses and sausages, as well as dishes, cookbooks, spices, cazuelas, and everything you need to make paella. Plus, they have recipes online. I’ve tried other paella recipes, but I always come back to the classic recipe from the Spanish Table.