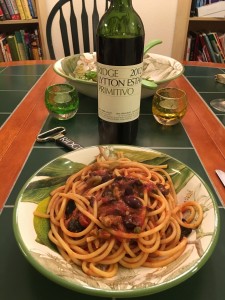 I had a shload (for those of you that can’t put two and two together, that’s shit load) of olives left over from the paella party. I don’t know, maybe I’m the only one who likes to snack on olives, or maybe I just buy way too many olives and then other people bring olives and we end up with an olive explosion. Luckily, with this overabundance of olives, I can make pasta puttanesca, a stinky spicy salty southern Italian style pasta named for the women of the night. Tonight I made a lovely version with bucatini (the sipping straw style spaghetti) from Abruzzo. Sadly, my wine supply is running a little low right now and I didn’t have a single Italian wine on my shelf. I was hoping for a zippy Sangiovese or something more rustic from the bottom of Italy’s boot, but sometimes you’ve gotta go with what you have, and the closest thing I had to Italian was Ridge’s 2012 Primitivo. Ridge is of course famous for Zinfandel, which is genetically identical to Primitivo. The grapes for the Ridge Primitivo are grown in the Dry Creek Valley region of California, so why would they put Primitivo on the label rather than Zin? Well, it turns out that this wine is made from Primitivo vine cuttings that were taken from southern Italy and transported to the Lytton Springs vineyard in Healdsburg. It was an experiment of sorts to see how it would compare to the Zins grown in the same vineyard. This wine was not at all what I expected, but wow, was it a showstopper. I had a bottle of it about a month ago and it was somewhat closed and just kind of tasted like an earthier version of Zinfandel. Tonight when I opened it, it was all black and purple fruit with this amazing velvety tannin structure. In other words, the Petite Sirah that it’s blended with was really showing through (it’s 88% Primitivo with Petite Sirath making up the other 12%). This wine was really a knockout, though I think I was hoping for something with a little more acidity and red fruit to go with the whore’s pasta, not the big bruiser that this turned out to be. But in any case, the wine was phenomenal, and while I enjoyed the hell out of drinking it tonight, it will likely be even grander in the years to come.