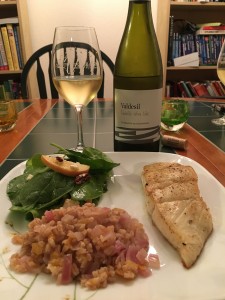 After overindulging the week of Thanksgiving, I was ready for something healthier. The local Whole Foods had some good looking halibut, and I had some farro and spinach on hand, so tonight we did pan-seared halibut with preserved meyer lemon farrotto, and spinach salad. The wine: the 2013 Valdesil Godello Sobre Lías. Godello, a relatively obscure grape variety native to Spain once was on the brink of extinction, until winemakers in the Valdeorras region, just east of Rías Baixas, began reviving it in the 1970s. Though it still accounts for a small percentage of Spanish wines produced, Oz Clark, in his seminal Grapes and Wines: The Definitive Guide to the World’s Great Grapes and the Wines They Make declares it a contender for “Spain’s most interesting white grape.” Valdesil is a family-run winery that’s been dedicated to the Godello grape since the late 1800s. The Valdesil Godello Sobre Lías sung with the pan-seared halibut, offering notes of apricot blossoms, honeycomb, and a slight minerality. The wine had a decent amount of acidity, though not as much as Spain’s other white wine gem, Albariño, and the opulent weight of the wine worked well with the firm white fish. For anyone looking to try something new, or just have something nice on the table to pair with fish, the Valdesil Godello Sobre Lías is an excellent choice.